Come join the epic adventure that is THE EVERLASTING TRILOGY! Get your copy on Amazon today! Also available on Kindle and Kobo.

*Keep up with all of the latest news on my writer’s website at virginia-bennett.com

EVERLAST: THE EVERLASTING TRILOGY BOOK ONE by Virginia Bennett

When a wartime experiment designed to create a super race goes terribly wrong, the government scrambles to terminate the project, but not before one seventeen year old boy manages to escape.

That boy is Phoenix Wilder, and ever since the experiment, he has stopped aging. Over a hundred years has passed and he is still seventeen. It is a lonely, dangerous world where everyone he has ever known or loved has long grown old and died. He is on the run, and the government will stop at nothing to silence him.

What Phoenix doesn’t know is that there are others out there like him. There are others who have escaped and survived. It will take a lot more than he bargained for to belong in their world, but the love of a girl begs him to try, challenging all of his instincts and ultimately changing his life forever. 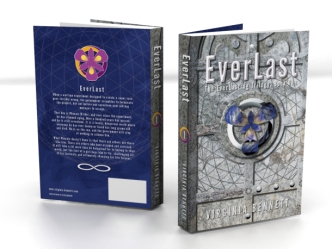 Banned from EverLast, Phoenix Wilder and his friends have become secure in their fugitive life. That is, until the strange and unusual Professor Jean Jacques LaMonde shows up.

The Professor claims that he only wants to help, but Phoenix can’t be sure. With a dangerously determined bounty hunter on their tail, in a town where the children are mysteriously disappearing, no one can be trusted.

Meanwhile, time is running out for Delphine. Phoenix quickly realizes that being born of the Lasting and the Living comes at a heavy price. He doesn’t want to lose the girl that he loves, but there is nowhere left to turn.

Can Phoenix break an ancient curse, survive the wicked dealings of a fiendish Switcher, and keep his friends together long enough to find the one with the power to save them all?