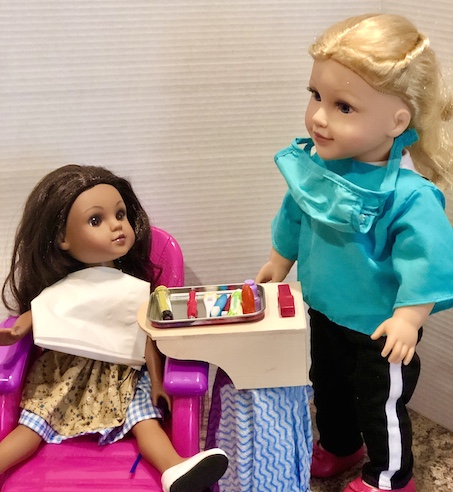 Hello guys, and welcome to the very last few days of summer with us, your friends at Faking It Mostly! Next week it is back to homeschool for us, but today the dolls want to take you somewhere extra special. My sister, Aunty to the Little Miss, is a dental hygienist. It is her job to keep all of those pearly whites clean, and sparkling.

However, it is also your job to take care of your own teeth, so that she can do her job even better. Together with the dolls, we are going to help you to do just that!

We will be joining our Hearts for Hearts girl Leena as she takes a trip to the dental hygienist for her bi-annual cleaning and checkup. Leena’s hygienist Newberry girl Miss Holly is very pleased to see that she has been taking such good care of her teeth!

“What are all of those tools for?” Leena asked. She was a bit nervous. This was only her second time at the hygienist. She was not sure if she liked it or not. She was happy with the toy prizes that she got the last time that she was there, but that was a pretty long time ago. She liked prizes, but she couldn’t remember if she liked dental hygienists.

“Those are for cleaning your teeth,” Miss Holly said with a smile.

“But I already clean my teeth at home,” she told Miss Holly. Leena had a nice blue toothbrush at home, blue because pink was for babies. “I can do it all by myself. How come you have to clean them, too?”

Miss Holly laughed. “Well, sometimes we can get in a hurry, and so we miss some spots at home.”

Leena could understand that. She was often in a hurry, especially with her chores. She just wanted to get everything done super fast so that she could go back to having fun.

Leena could remember a few times that she had been in a really big hurry for bedtime story. She could probably admit that she might not have brushed every single one of her teeth at those times.

She opened her mouth wide, but then she stopped, and closed it again.

“Wait, is this going to hurt?” she narrowed her eyes a little, suspiciously. 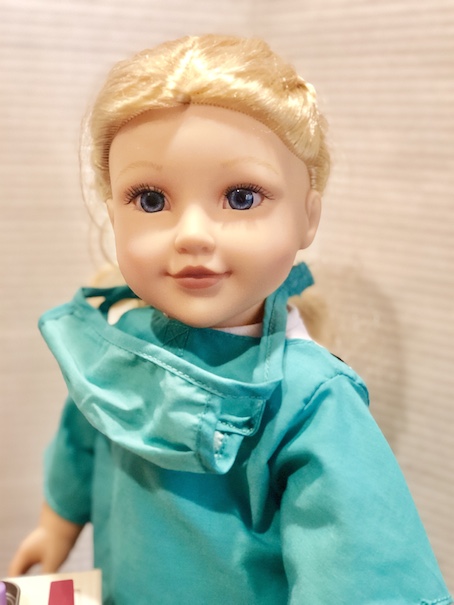 “No, of course not,” she said. “But do you know how you can keep your teeth in tip top shape, so that they stay healthy and pain free?”

“By brushing them?” Leena had learned all about teeth brushing in school. She knew that she should brush her teeth for as long as it took to sing the whole alphabet. She could probably admit that there were times when she was brushing her teeth that she would sing her ABC’s pretty fast.

“Yes, that’s one way,” said Miss Holly. “But do you know what is even more important than brushing your teeth?”

“Not eating candy?” She wrinkled up her nose. She didn’t like that idea. She liked candy very much.

“Well, sugary treats are definitely not the best for your teeth,” she agreed. “But we have ways of cleaning the sugar bugs away, so I’m sure that a little bit of candy once in a while won’t hurt.”

Miss Holly put on her mask and picked up her cleaning tools. Leena opened her mouth wide as Miss Holly began cleaning her teeth. 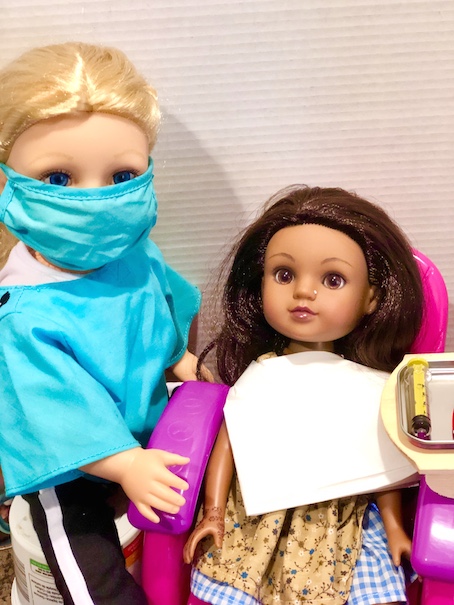 Leena giggled. It didn’t hurt at all. In fact, the cleaning brush that Miss Holly was using tickled like a little buzzy bee on her teeth and gums. 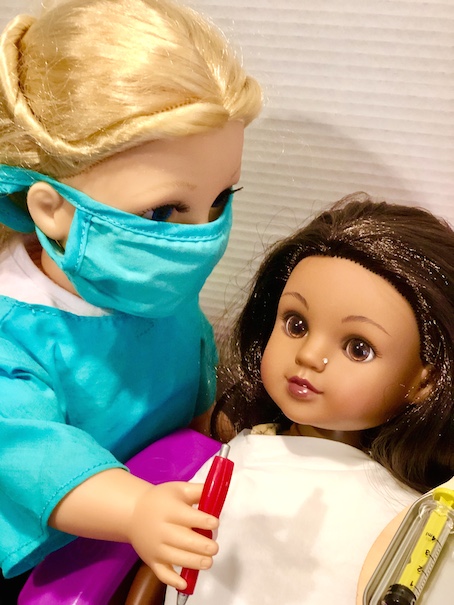 “Actually, the most important thing is called flossing, and I’m going to show you how to do that in a minute.”

When Miss Holly was done cleaning Leena’s teeth, she showed her the long string of dental floss.

“We use this to clean in between your teeth,” she explained. “The floss can reach the places that the toothbrush can’t get to.”

“I’ve seen that before,” she said, proudly. “My mommy has floss at home.”

“Yes, it’s important to learn how to floss your teeth at a young age, so that you can get into the habit of doing it everyday.”

“Do you want to know how floss really works?” she asked. Leena was curious. She was starting to realize that maybe she didn’t know as much about teeth as she thought. She nodded, eagerly.

“Well, let me tell you. Inside of our mouth is something called bacteria…” Miss Holly began. 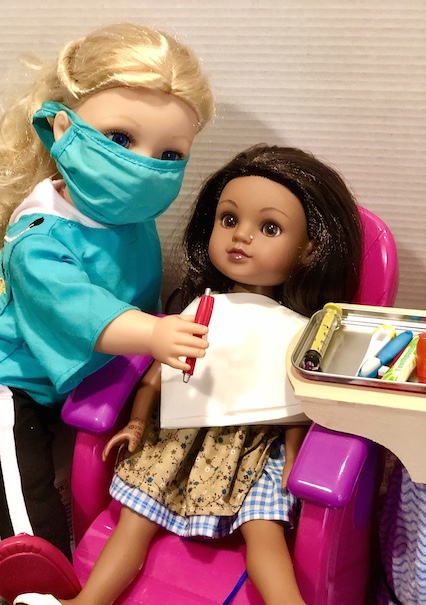 “Oooh! I know what that is! Bugs!” Leena made a yucky face. She wasn’t exactly comfortable with there being bugs in her mouth. She had tried eating a worm once, but that was when she was three, and she didn’t remember much about it.

“That’s right,” Miss Holly said. “Except these are not bugs that you can see.”

“Yes!” Leena nodded, enthusiastically. “They’re mitrostopic! That means that they are so small, that you can’t even see them without a mitrostope!”

Miss Holly grinned beneath her mask.

“That’s right. And do you know what else they are?” she asked. 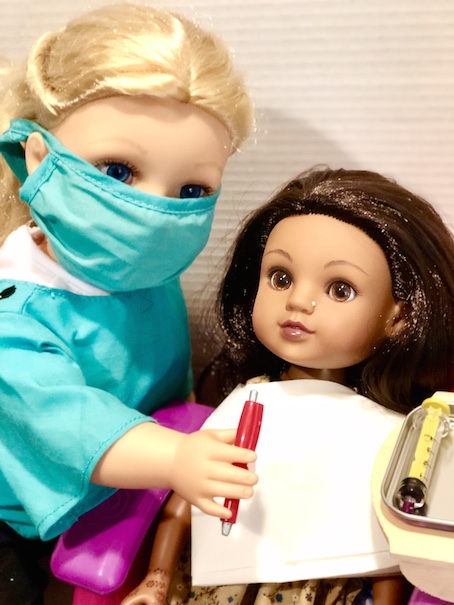 “They are hard workers,” she said. “They set up camps inside your mouth.”

“Really?” Leena’s eyes grew round as marbles this time.

“Oh yes,” she said. “And once they set up their tents, guess what they do?”

“They start up their machines to begin drilling holes in your teeth!”

“Wow!” Leena blinked, rapidly. She was pretty sure that she didn’t want any holes in her teeth.

“But we need to stop them!” she exclaimed.

“Exactly!” Miss Holly agreed. “And that’s what our toothbrushes and our floss is for!”

Leena was confused again. How was her blue toothbrush and a little piece of string going to stop big bad bacteria workers from destroying her teeth?

“Have you ever spun around and around in circles until you were so dizzy that you fell down?” Miss Holly asked.

“Oh yes! Absolutely!” Leena grinned. She loved to spin in circles. Sometimes she got so dizzy that she had to rest awhile. She didn’t do any more spinning on days like that.

“Well, bacteria bugs get confused very easily,” Miss Holly explained. “When we go in with our toothbrush and our floss, it’s very much like spinning them around and around in circles. The bacteria bugs forget what they are doing. Their tents fall down, their machines get turned upside down, they can’t do any work at all!”

“That’s right,” she said. “Those workers can’t drill when all of their equipment has fallen over. They have to take a day off, and get organized again, so that they can try again the next day!”

“And that’s why we have to brush and floss every single day!” Leena’s eyes lit up in understanding.

“Definitely,” Miss Holly said. “Especially flossing because bacteria bugs really love to hide out between teeth where it is nice and warm and cozy. They can really get a lot of drilling done down in there.”

“We gotta knock down their tents!” Leena was squealing.

She helped Leena down from the dental chair.

“Time to pick a new toothbrush!” she said. “Red or blue?”

“Definitely blue!” Leena smiled. “And Miss Holly? Can I have some floss too, please?” 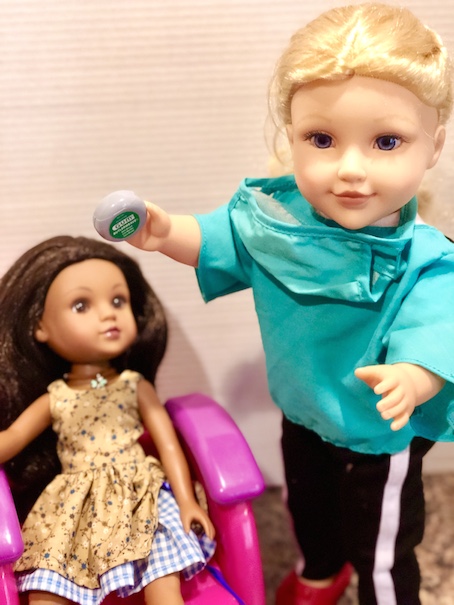 “Of course!” said Miss Holly, handing her some.

“Oh boy, I have to tell my sister Suri all about the bacteria workers!” Leena said as she took the floss. “She probably doesn’t know, and she’s even bigger than me!”

Leena happily clutched her new toothbrush and her floss as she ran out to the waiting room to find her sister.

“Suri! Suri!” she called out. “Guess what?! You don’t have to be scared of the dental hygienist! It didn’t hurt one bit!”

I hope you enjoyed our trip to the dental hygienist today! If you want to catch more of Leena’s antics you can read about her and her sister Suri HERE

Thank you for joining us! Leave a comment below!