Hello! Here at Faking It Mostly, we love bath time. Remember we love everything water related. Just not getting our faces wet.

Anyhow, bath time is a magical time where mommy gets to take a time out and kiddo gets to play to her heart’s content in a giant bin full of water. What could be better than that?

We tried the shower thing and I thought that as she got older she might like to take a shower instead but tub time is still going strong. The only problem is that as she gets older, it gets trickier and trickier to find anything suitable to play with in there.

I almost had to face the facts that tubby’s are meant for babies mostly as that was the only age group they were selling to for bath toys.

We finally did find some very cool waterproof cards that we could play with in the bath and a nice dress up doll set. The neat thing about these products is that they use water tension to cling to the bath surround. This was before I found this post by one of my favourite blog moms Filth Wizardry: Bathtub Craft Foamies

Of course like everything that she does, I was amazed and stoked to try it out.

What are they? Bath Clings! They are made out of regular craft foam and you can get it anyplace. We got a whole pack from Michael’s.

Our first batch turned out quite rough which was okay by me because the kidlet made most of them herself and was quite proud of them. She pretty much just sat in the tub and had a grand ol’ time cutting them out and sticking them up there on the walls.

The trouble was that she kept getting frustrated because she wanted actual shapes and things that looked like well things. That’s tricky to do with just a pair of scissors and some craft foam.

So I got to thinking. I didn’t want to have to draw a whole bunch of shapes for her to cut out. That just defeats the purpose of me letting her do it.

Finally it hit me. Cookie cutters! We have a ton of them. I don’t recommend letting your kids take the metal ones into the bath with them but the plastic ones work fine. By this time kiddo was out of the tub anyway so she just took a whole pile of craft foam and the cookie cutters and got to work.

What you do is this. Take a piece of craft foam, any colour. Choose a cookie cutter, any shape. Lay the foam out on a flat surface, a cutting board works. Press the cookie cutter into the foam and it will make an indentation. Cut along the line. The indentation won’t last forever but it lasts long enough to cut around and the kids can do it themselves. You might have to help younger ones.

And there you have it. A whole pile of new bath clings to play with in the tub and the great thing about it is that you can make as many of whatever you want. There is no limit to what you can try. We might try making some themed sets but for now we are just going with randomness.

Our next bath tub inspired toy comes from a moment of desperation. She was bored and I wanted ten minutes of peace. So I had to find something that would occupy her. Just so happens that Pinterest is my BFF.

I have found so many amazing ideas on there and I even use some of them. Sometimes. I say that as a loosely based suggestion.

In reality most of my time spent on Pinterest is endless scrolling through the funny pages and pinning crafts like crazy, mostly ones that I know I will never get around to actually doing. Somehow the saying, it’s the thought that counts has taken on an entirely different meaning for me.

Anyhow, I needed a toy and Pinterest needed another addict so there I was. Ten minutes later, this is what happened. 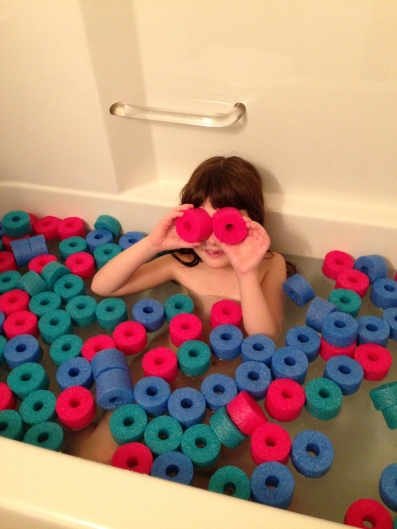 Fun! And I only had three pool noodles. Imagine.

As I said before, I was getting rather desperate for ideas of what she could play with in the tub. I had pretty much tossed every plastic toy that we had in there with her at one time or another, but I want to share what I came up with the other day because it was a huge hit. (the sunglasses without lenses were a huge hit too) 🙂

These are called Pop Beads and they come in all different colours and shapes. They snap together but that isn’t why they are so cool. They also float! And they are waterproof of course and that’s awesome because what fun! No mold and they are big enough that they don’t go down the drain, although I usually just scoop them all back up before we pull the plug. There you have it, an activity for older kids to do in the tub. 🙂 Perfect!

What toys do your kiddos like to play with in the tub? I am always on the lookout for new ideas.

(Update: Since this post we have tried squinkies, party animals, lalaloopsy tinies, mini my little ponies, shopkins, and legos in there too. Only recommended for older children who are more responsible about not letting their toys go down the drain. In my books, success.)