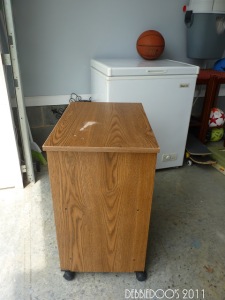 As you can tell by the title of this blog, a whole lot of what I do isn’t exactly by the book. In fact, nothing that I do is by the book, which is why I can’t cook, but that is an entirely different blogpost.

I want to introduce you to one of my favourite pieces of redo furniture. Why is it my favourite? Mainly because it looks pretty. Also because it took such a long time to find, like a lot of the stuff that I redo (sigh), and truly because it cost me next to nothing. $12 to be exact.

This is sort of what it looked like before. I don’t have a true before picture and these before pictures are actually nicer than the original looked, but they will have to do. 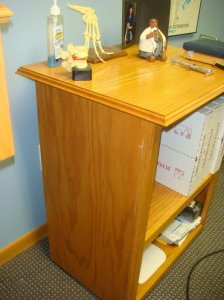 As you can see from the pictures, it is a 1970’s model microwave cart type of stand with wheels. Mine was actually the ugliest thing that I had ever seen, so naturally I had to buy it so that I could redo the heck out of it. Mine also had white melamine with ugly orange stains on it glued to the top so that was even more tempting. How could I refuse? At $12 it was a steal.

Actually it was highway robbery and the thrift store should have paid me to take it off their hands. Nonetheless, I had to have it. Secondly, I had to have a use for it since I am not in the business of simply buying a bunch of useless junk. (Bah! Who am I kidding? Not my husband, that’s for sure! He thinks that all I do is buy useless junk!)

The basic process for redoing this project was to first prime the entire thing. I like to use KILZ primer. It looks like this:

Once that was dry, I painted the entire thing a lovely shade of…drumroll please…Maroon.

I know what you are thinking. Hideous. I was also thinking that which is why the entire time that I was doing this project, I kept having to reassure myself that it was only $12. If it was a total disaster, at least my husband wouldn’t kill me.

That’s how I roll.

However, believing that things had to get worse to eventually get better, I decided that since there was no turning back, I could only press forward with my original plan which was to create a dark espresso wood finish to match the furniture in my TV room.

I took something called gel stain next. It looks like this:

Now I have to tell you, I hate this stuff. I abhor it. It makes a huge mess, it stains everything, it never comes off your hands, it takes a lifetime to dry and if you turn your back on it for even a second, pretty soon it’s everywhere. It’s just the most ludicrous product that I have ever used.

Seriously though, I can’t stress enough how much you will want to strangle yourself if you try to use this product. That being said, I was on a mission.

Using a large bristle brush (and that just means a big old brush that you don’t mind throwing in the garbage after since this crap will never come off of it, ever), I painted the gel stain on the maroon sides and the front of the cart using long straight brush strokes.

It looks very nice if you can see a lot of the maroon streaked underneath. It adds a cherry undertone to your dark faux wood finish. I also painted the door in the same way, but I could only paint one side of it as it had to lay flat to dry.

Days went by. Still tacky. More days went by. It was still sticky. By that time I thought that the whole thing was a bust.

And for some reason I thought that it was a great idea to do this project in the front entryway to my house. Of course once it was already there, I couldn’t move it anywhere else without having to maneuver it through small spaces, thereby getting gel stain on everything.

So there it sat for days and days drying. I didn’t invite people over because they would have to walk around the thing just to get into the house. I spent days and days keeping a curious five year old from mucking it up with her hands. (Basically think oil paint drying time and multiply that by a thousand.)

And then one day, I woke up and lo and behold, it was dry. For real.

I was so happy until I realized that I had to turn that damn door over and do the other side. ~Instant feeling of regret for ever having started the project in the first place~

After more drying time and a lot of questioning what the heck I had gotten myself into, I was finally able to varathane the entire thing. Then I sat and waited for that to dry for another day and a half or so.

By that point I was starting to see a light at the end of a very long and arduous tunnel, so I was getting excited. Of course there was still the problem of the very old, very stained and very ugly melamine top. What to do?

Well I went to Home Depot and I did what I always do: Stand around staring at stuff trying to imagine a solution to my problem.

And then I spied some tiles that were the perfect fit. I can’t imagine what I would have done had I not found a tile that fit so perfectly. It was like it was fate. The gods were finally throwing me a bone after having to go through gel stain HE-double hockey sticks.

I bought some of the strongest adhesive I could find and I glued it on there. I changed out the hardware and voila! My favourite redo piece, quite possibly so because of all of the blood, sweat and tears that went into it.

Isn’t she pretty? And she has a little shelf inside to store all of my DVD’s out of sight. Amen.